After a year of masking, avoiding people and staying out of crowds, many of you may be itching for a good Memorial Day cookout — or at least a weekend in the garden, woods or at the lake. Who can blame you? All of us have had our lives upended.

Of course, we mustn’t forget the real reason for Memorial Day: to honor those who have served our country and died. So, though you may be aching for celebration, perhaps honoring the intention of the day is an apt reason not to party too hard this weekend.

But should you gather, having some easy to make, easy to grab foods ready will make the whole thing a lot less stressful.


In a new novel I am reading, “That Summer,” by Jennifer Weiner, a character named Daisy recounts the disaster that was her first big party — a barbecue — after marrying her much-older husband. They were hosting the other partners from his law firm and the associated significant others. Daisy pulled out all the stops, getting the butcher to grind her own special mix of ground meat and then mixing in mushrooms and blue cheese before forming her hamburger patties. Instead of grocery store hot dogs, she had ones from Chicago flown in. She even spent hours making her homemade onion dip.

But in the end, it was only the hot dogs that really got eaten with gusto.

Daisy was mortified. Her husband wasn’t pleased. As he’d told her: he just wanted basic foods.

The scene made me cringe, recover and cringe again (poor Daisy, plucked from her hard-fought senior year of college to become a housewife) as misogyny played out in all sorts of ugly paradigms. But it did have a bit of a lesson in it: Know your audience. Sometimes people really do just want the simple stuff.

In Daisy’s case, perhaps she could have used that great meat blend but just lightly seasoned it and made patties. As her husband points out, not everyone likes blue cheese (or mushrooms, for that matter). Grocery store hot dogs are always fine.

Oh, and divorce the husband who treats you like a housekeeper.

For your cookout planning though, take note. A mix of familiar foods and more adventurous ones make for a good party.

Start with the basic hot dogs and burgers on the barbecue (or grill — but I still cook over charcoal myself, for now). Mix up a couple salads. Potato salad is a classic. Pasta salad for those who avoid mayonnaise (there are many of us out there, I assure you) and perhaps a third — coleslaw? Tossed? Something else?

Then offer an adventurous dish or two, if you want. That way you get to have your kitchen fun and ensure your guests — even the picky ones — find something good to nosh on.

Looking for salad recipes? These will help you on your way to breakout barbecue planning. 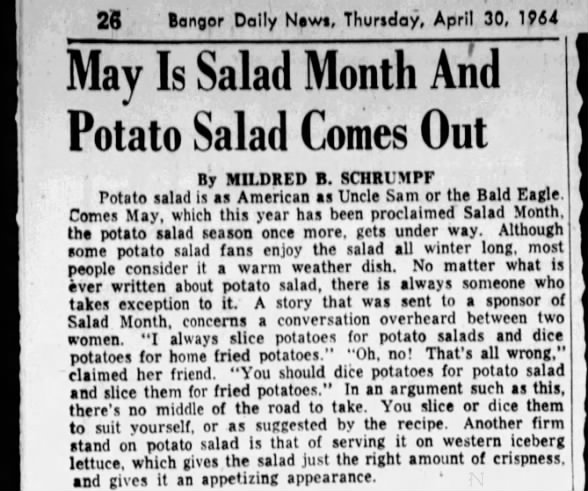 Sandy Oliver shared a recipe for Warm Potato Salad more than a decade ago in her Bangor Daily News column that she said can be served warm or cold. It’s red potato-based and also features soft goat cheese and vinaigrette — a delightfully different take on a classic.

In her April 30, 1964, column, Bangor Daily News columnist Mildred B. Schrumpf — known more commonly as Brownie to many readers and fans — shared her recipe for Marinated Potato Salad, lamenting how sure every home cook is that their method of making potato salad is the only right one. Cubed potatoes? Sliced potatoes? Is one really better? 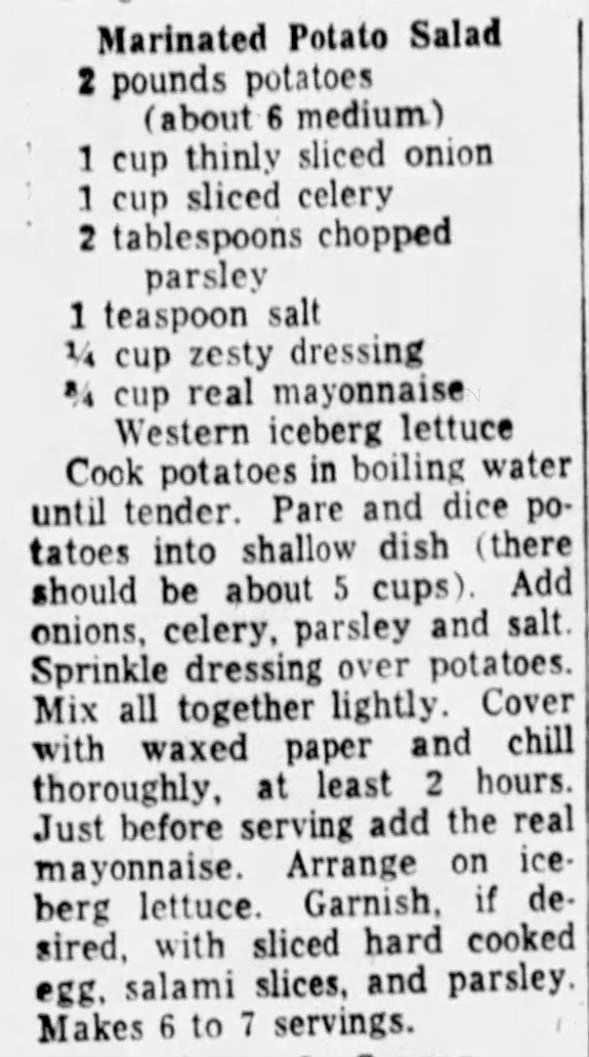 Of course, if you are looking for something a little more adventurous, I highly recommend my German-Style Roasted Cauliflower Salad. It’s like German Potato Salad, with cauliflower in place of potatoes. 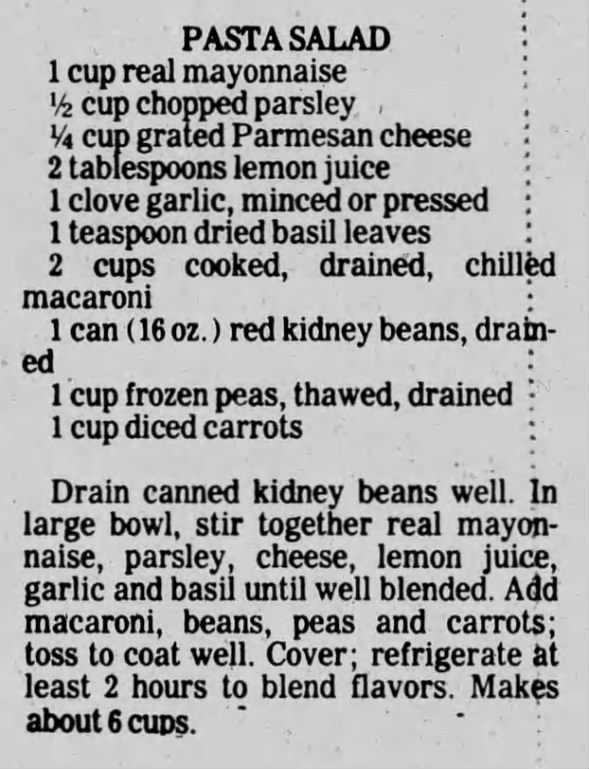 Pasta salad can be as easy or complicated as you want it to be. In my house, it’s made simply: colorful rotini pasta, black olives, blanched broccoli and perhaps some tomatoes, shredded carrots and onions . It’s all tossed together with a heavy dose of whatever Italian dressing is handy and left to chill for a few hours before serving. Easy peasy.

Food columnist Sandy Oliver takes a similar use-what-you-have approach with her Mediterranean-inspired Pasta Salad, which features many veggies along with some feta cheese and kalamata olives.

In her July 7, 1981, column, Brownie shared a recipe for what she called Pasta Salad, though I would dub it macaroni salad, as it’s a mayo-based salad featuring (you guessed it!) macaroni. Regardless, it’s a favorite for some.

Personally speaking, I like a nice Oil and Vinegar Coleslaw. It’s tangy and refreshing and goes with many barbecued meats and other proteins.

If you are looking for a more traditional coleslaw, Sandy Oliver’s version shared in a 2020 column is the way to go. It hits all the right notes of creamy and sweet and is filled with cabbage and a few other appropriate veggies.

If you are looking for something a step outside the ordinary, do try Brownie’s version. It marries a slaw with apples and vinegar with a creamy mayo-based dill dressing. Oh, the notes that hits. 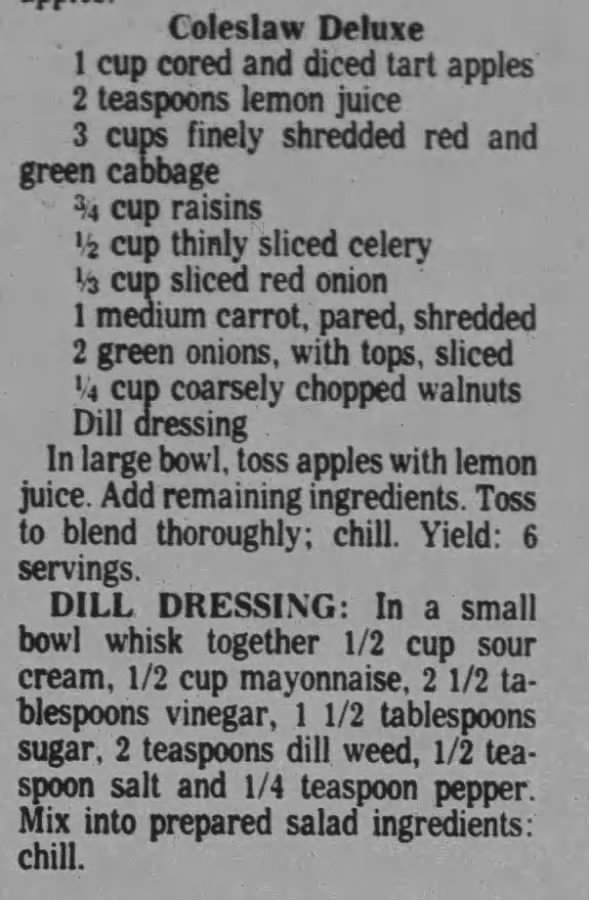 More articles from the BDN

Sarah Walker Caron is the senior editor, features, for the Bangor Daily News and the editor of Bangor Metro magazine. She’s the author of “Classic Diners of Maine,” and five cookbooks including “Easy... More by Sarah Walker Caron