LePage will outsource Medicaid staff, even though it will cost state more

Gov. Paul LePage’s administration will outsource part of the state’s Medicaid application process to a Massachusetts organization even though it will cost the state more than having state employees continue doing the work.

In June, the Maine Department of Health and Human Services will eliminate the positions of 10 state employees and enter into a $5.6 million, 25-month contract with a division of the University of Massachusetts Medical School that determines whether people are disabled for the purpose of qualifying for state-funded health coverage.

The state chose the vendor without asking for bids from other potential providers. And the annual price tag of $2.7 million is well more than double the $1.1 million set aside in DHHS’ budget for the first year of the contract. The $1.1 million is a combination of state and federal funds.

While former Health and Human Services Commissioner Mary Mayhew said last year that the move would save state taxpayers money, contracting out the service will actually cost them about $300,000 more each year than if they had continued paying the state employees’ salaries, according to a review of budget documents.

A DHHS spokeswoman didn’t respond to questions from the BDN inquiring how the state would make up the difference between the expected and actual costs of the contract. In a contract document recently posted to a state website, DHHS officials acknowledge that outsourcing the disability determination service will cost the state more. However, the document reads, “the Department is confident that this slight increase in cost is more than balanced by the high quality of work to be performed.”

Starting in June, Commonwealth Medicine in Shrewsbury, Massachusetts, UMass Medical School’s public consulting division, will take over the work currently performed by DHHS’ 10-employee Medical Review Team. The team examines medical records to determine whether residents applying for health coverage through the state’s Medicaid program qualify for coverage due to a disability.

Commonwealth Medicine performs similar work for Massachusetts, New Hampshire and Missouri, according to its website. A spokeswoman for the organization referred all questions to Maine DHHS.

“This department and this administration seem bound and determined to contract out as much as they can and privatize these functions,” said Mary Anne Turowski, director of politics and legislation for the Maine State Employees Association. “It’s always been a state function to determine eligibility for Medicaid. If they start with this, where else will they go?”

State employees will keep handling other aspects of Medicaid applications, continuing to determine whether applicants meet the income guidelines for coverage. In addition, another state office that conducts disability determinations on behalf of the federal Social Security Administration to decide eligibility for disability income will continue operating.

No state figures were available indicating the current workload of the 10-person Medical Review Team slated for elimination, including the number of disability determinations they make each year.

Of the 268,000 Maine residents who currently receive Medicaid coverage, about 22,700 likely gained coverage after the Medical Review Team determined they were eligible due to a disability, according to a review of the state’s most recent Medicaid caseload report and the most recent available Maine records from the U.S. Social Security Administration.

The LePage administration expected part of the projected savings would result from the federal government funding a greater portion of disability determination expenses once the UMass Medical School team took over. According to the state contract document, the UMass Medical School staff are “skilled professional medical personnel.” The federal government is likely to pay for 75 percent of the cost of their services; it currently funds 50 percent of the Medical Review Team’s costs. 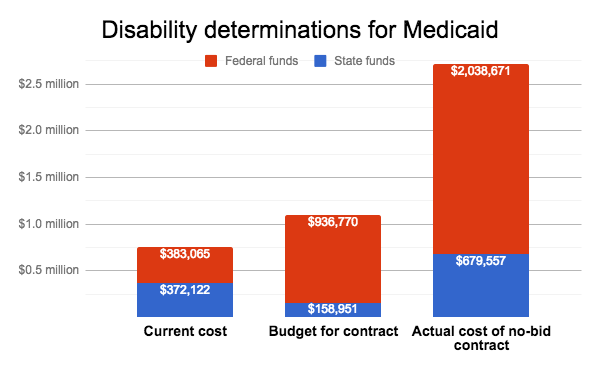 But even with the federal government picking up a larger portion of the tab, the cost to the state would work out to $680,000 per year — $521,000 more than DHHS has set aside to cover the state’s portion of the contract. While the LePage administration projected $213,000 in annual savings from eliminating the Medical Review Team, the contract with UMass Medical School will cost state taxpayers $300,000 more a year than they’re currently paying to have state employees perform the work.

The contract with Commonwealth Medicine marks the latest major contract DHHS has awarded without using competitive bidding. In 2016, it awarded a $23 million, 2½-year no-bid contract to the Maine Children’s Trust to administer the state’s home visiting program for new parents. In 2013, the department awarded a $925,000 no-bid contract to consultant Gary Alexander for a series of reports on the state’s social service systems; Alexander partially plagiarized those reports. More recently, DHHS has given out smaller no-bid contracts, paid for with federal Temporary Assistance for Needy Families funds, to after-school programs around the state.

“There’s no reason, no reason, to not put this out to bid,” said Rep. Drew Gattine, a Westbrook Democrat and co-chair of the Legislature’s budget-writing appropriations committee. “I don’t understand why you wouldn’t just put out a [request for proposals] and take the best bidder, if this is what you’re going to do.”

In its contract document justifying the no-bid award, state officials reported that the service was available from only one entity.

The contract with UMass Medical School runs from June 1 of this year to June 30, 2020, with the possibility of two, one-year extensions. After that four-year period, DHHS said it anticipates soliciting competitive bids.

The consulting firm Manatt noted this possibility in a 2015 analysis of potential savings to Maine by expanding Medicaid under the Affordable Care Act. The analysis projected the state could save more than $2 million annually due to the change since the federal government would cover 90 percent of costs for these newly eligible low-income adults, instead of the 64 percent it would cover if they qualified because of a disability.

Maine Focus is a journalism and community engagement initiative at the Bangor Daily News. Questions? Write to mainefocus@bangordailynews.com.

Maine is planning for a worst-case coronavirus scenario. It’s hard to predict what happens next.

April 7 morning update: The latest on the coronavirus and Maine

April 6 evening update: The latest on the coronavirus and Maine

How to make whipped coffee

Pittsfield police take vote of no confidence in their chief

Without staff, Maine people with disabilities during the pandemic ‘will die’

A Maine hospital may have enough surgical masks for 2 weeks. It has 2 coronavirus patients.