The quarantine area for the emerald ash borer, an invasive beetle killing ash trees throughout North America, was recently expanded to the Maine border by the Canadian Food Inspection Agency, prompting state biologists to ramp up public outreach about the pest.

A quarantine area for pests such as the emerald ash borer is an area with defined boundaries that limits the transportation of wood, allowing for wood to be moved within that quarantine area, but not transported outside the area. Its purpose is to prevent the spread of the pest, or at least slow it down.

“Before this, the quarantine area was nowhere near our border,” said Colleen Teerling, forest entomologist for the Maine Forest Service. “This mean that wood — and for this quarantine, ashwood — can be moved anywhere within that pink [quarantine] area.”

The quarantine area has been expanded because several new emerald ash borer infestations were recently found throughout Quebec and New Hampshire. 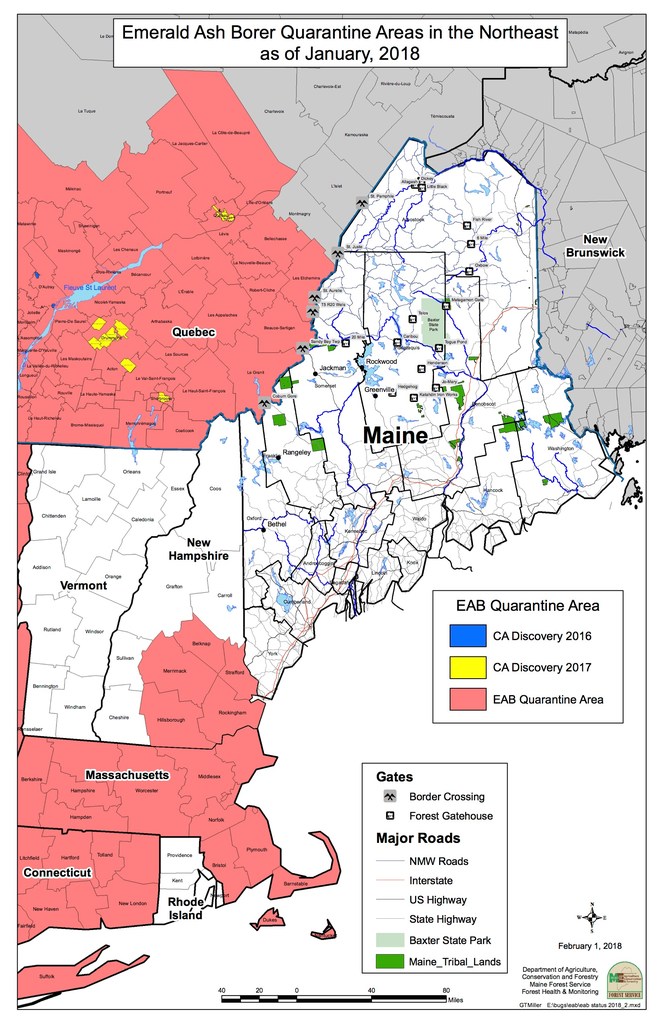 For Maine, Teerling said, that means potentially infested wood could be transported right up to the border of Maine in Oxford, Franklin and Somerset counties. (The quarantine has yet to reach as far north as the Canadian border in Aroostook County.) The same can also be said for the southern half of York County, where the quarantine area has been expanded throughout southern New Hampshire to the Maine border.

“New Hampshire is still fighting it county by county,” Teerling said, “which is really good for us because New Hampshire is our neighbor. They haven’t just thrown up their hands and let wood move anywhere.”

Meanwhile, Connecticut and Massachusetts are entirely within the quarantine area, as are the majority of states in the east half of the country. To date, the destructive beetle has been found in 31 states, as well as the Canadian provinces of Ontario and Quebec.

In a recent press release, which included a map of the newly expanded quarantine area, the Maine Forest Service stressed that success in slowing the spread of the pest and managing impacts will hinge on early detection and response.

“There are a number of things we can do to slow the spread down, to prevent it from being this big expensive catastrophe,” she said. “Our hope is it will be more of a slow-moving problem, to keep a little control on it.”

The Maine Forest Service and partners are using several methods to monitor for emerald ash borer including trapping, visual surveys, trap trees and biosurveillance. But they can’t be everywhere at once, that’s why public education about the pest is so important. Reports from Maine residents may be the key to early detection of infestations.

Ash trees that are infested with the emerald ash borer are often have bright patches on their bark created when woodpeckers excavate overwintering larvae and prepupae. This appearance has been termed “blonding of ash.” But not all ash with blonding have been attacked by emerald ash borer.

“There are a number of things we can do to slow the spread down, to prevent it from being this big expensive catastrophe,” she said. “Our hope is it will be more of a slow-moving problem, to keep a little control on it.”

If infestations are detected early, the state can create a quarantine area around the infestation, which can help slow it spreading. Towns can also use pesticides to save certain ash trees of value, and large trees that are infested can be cut down to slow the spread. Another method biologists are using to help control the pest is a biological control: a tiny, parasitic wasp that that lays eggs inside ash borer eggs, preventing them from hatching.

“We don’t know how well it’ll work because it’s a fairly new pest,” she said. “We’ve only been studying it for 10 to 15 years or so. But it looks promising.”

In the press release, the Maine Forest Service stated that all of Maine is vulnerable to introductions of the emerald ash borer due to the insect’s ability to spread in infested firewood. For that reason — and to minimize the risk of spreading another wood-boring insect, the Asian longhorned beetle — the Maine state legislature banned the importation of untreated out-of-state firewood in 2010.

For more information about emerald ash borers and to report a suspected infestation, visit www.maine.gov/eab.

May 28 evening update: The latest on the coronavirus and Maine

What’s wrong with my seedlings? A short troubleshooting guide for finicky plants

How you can catch 20 fish in just a few hours

These common household items can help you in the garden

This easy asparagus soup is a fresh, flavorful dish