Charles LeClaire | USA Today Sports
Indianapolis Colts wide receiver T.Y. Hilton (13) runs after a catch against Pittsburgh Steelers defensive back Ross Cockrell (31) during the third quarter of a Dec. 6 game at Heinz Field.
By Regina Rooney, Special to the BDN • December 13, 2015 8:25 am

It has been over a year since the NFL was rocked by a series of scandals related to domestic violence.

In September 2014, the world watched Baltimore Ravens player Ray Rice violently assault his then-fiancée, Janay Palmer, on tape. Although the case had played itself out in court earlier that year, the tape elicited a firestorm of public interest, only some of which criticized Rice.

Survivors of domestic violence pushed back, launching the #WhyIStayed and #WhyILeft hashtags in a powerful grassroots social media campaign demanding that the public focus on Rice’s actions, rather than on whether or not Janay Palmer Rice continued to care for him. In the wake of that case, the NFL vowed to improve the way that it handles domestic violence and sexual assault within the league.

All of this played out against the backdrop of last year’s football season. So where are we now? And has anything really changed?

Like in most efforts to create social change — to shift how a culture thinks and acts — we have seen progress and also setbacks in the NFL’s response to domestic abuse.

Bowing to public pressure, the NFL reached out to national experts in domestic and sexual violence, including the National Network to End Domestic Violence, for help. In a move applauded by advocates, last December the league rolled out a new personal conduct policy, detailing a tougher approach to dealing with off-field conduct by all NFL employees, including players. The policy specifically addresses domestic and sexual violence.

The league has also implemented new prevention programming intended to address underlying causes of violence against women. They have increased their work with the NoMore Campaign, producing a series of PSAs featuring NFL stars, and airing this much-talked-about spot during the 2015 Super Bowl. There is no question that the NFL has dedicated a lot of time, energy and money to addressing this issue.

And yet, we have seen resistance to change as well. In January, the NFL Players Association filed a grievance over the new personal conduct policy, arguing that the policy violates the terms of the players’ collective bargaining agreement.

For years domestic violence advocates have been trying to convince the NFL to “Go Purple” for Domestic Violence Awareness Month in October. This year, not only did they once again decline, but they fined William Gay of the Pittsburg Steelers nearly $6,000 for wearing purple shoes during a game — a choice he made to honor his mother who was killed by his stepfather.

And critics cite concern over cases like Greg Hardy’s, in which serious allegations of assault were settled out of court, and Hardy went on to become a bigger star than ever, playing for the Dallas Cowboys.

Many question whether the NFL is willing to do more than create PSAs and truly work to hold offenders in their ranks accountable. What we must recognize is that creating real change takes time.

This can be hard. When we decide we want accountability, we tend to want it now. But the NFL is a large institution, with many years of practice responding in a certain way and many competing pressures informing its decision-making on this issue. The change that needs to be created isn’t only in one policy, or in the response to a single case.

The way players are valued needs to be redefined. Their value should encompass not only their statistics on the field but their importance as role models. An inability to meet certain standards should be a liability. The league must reexamine deeply held ideas about violence amid the context of a game that demands aggression and fierceness to succeed. 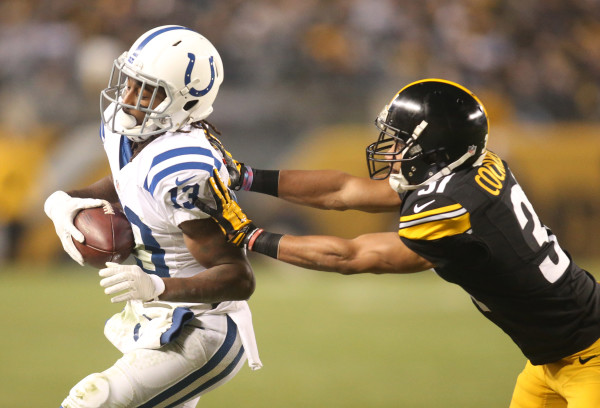 As an institution steeped in machismo and male toughness, it must challenge its beliefs about gender, and it should continue seeking help from outside the league in doing so. Really dealing with the issue of domestic violence means creating an altogether different type of NFL culture than the one that exists today.

The NFL has made some strides in the right direction over the past year, but real reform will take commitment over the long haul: to digging deep, to learning and to continuously working to improve. It is right for people to question whether the goal has been accomplished, because it has not.

But we can’t give up in frustration because the league is still falling short. We, too, need to settle in for the long haul. As the 2015/2016 football season ramps up, we need to let the NFL know that we haven’t forgotten about its pledge, and to demand that it lives up to it.

Otherwise, the focus on domestic violence risks being just another highlight of a season past.

The history of Maine in 11 popular songs, singers and composers

Island residents and Old Town grapple over rights to land

The Fundraising Gap Is Narrowing In Maine’s Vaccination Campaign. Here’s who is behind the fundraising.

Paul LePage says he was paid $7,500 last year to advocate for CMP corridor