Video: Take a ride down the Toboggan Nationals chute!

Dressed as ninjas, we carried our toboggan up the daunting staircase leading to the top of the chute on Saturday. It was my third year in a row participating in the U.S. National Toboggan Championships at the Camden Snow Bowl, and I was leading one of the BDN’s two teams — the “News Ninjas.”

While the Toboggan Nationals is a competition of speed, it’s also a competition of costume. We wore black outerwear and ninja hoods, with green sashes, headbands and armbands. As we walked through “Tobogganville” — a makeshift village of food vendors, tents, ice shacks and campfires at the base of the toboggan chute —  children pointed at us and exclaimed “Ninjas!” Their eyes were usually focused on our katanas, which my boyfriend, Derek, and I had crafted out of cardboard and newspaper. 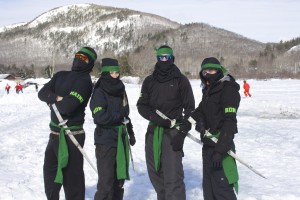 The katanas would not be going down the chute with us. We had strengthened the newspaper swords with wire coat hangers, and I could just picture someone being impaled when our sled crashed at the bottom of the chute — which would certainly be a toboggan team captain’s worst nightmare.

My three teammates — Derek Runnells (my boyfriend and frequent hiking buddy), Ashley Conti (BDN photographer), Pat Lemieux (BDN media, subscriptions and promotions manager) — were competing for the first time. Since we were riding on a loaner sled supplied by the Camden Snow Bowl, we didn’t plan on breaking any speed records. We were there for the thrilling experience and to represent the BDN, one of the event’s top sponsors. 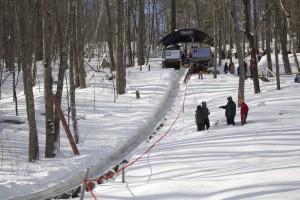 Nevertheless, we’d had fun talking trash to the BDN’s other team, “La Verdad, la Libertad, la Velocidad,” which translates from Spanish as “truth, freedom, and speed.” They were dressed as Lucha Libre, Mexican Wrestlers, with colorful masks and flowing capes.

In response to our competitive comments on Twitter and Facebook earlier that week, the team captain of “La Verdad, la Libertad, la Velocidad,” BDN photographer Troy Bennett, found a toboggan on Craig’s List and drove to Poland, Maine, to pick it up. He then nursed it back to life with multiple coats of wax and a new cushion.

In other words, the News Ninjas had resigned to the fact that we were going to lose. I was a bit disappointed. There was no way we could beat our fellow BDN team with a loaner sled, which are known for being slow.

Each year, registration for the big competition is limited to 425 teams. And in 2015, the U.S. National Toboggan Championship’s 25th anniversary, those 425 slots filled up well before the big weekend. Therefore, it’s understandable that we had to wait a few hours in line for our turn to cruise down the chute. The wait was made bearable by the fact we were all in it together. All teams had to wait to experience the fun and terror of flying down the ice-coated, 400-foot-long Jack Williams Toboggan Chute. 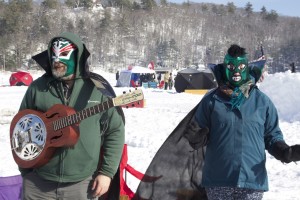 As the sun sank behind clouds, the temperature plummeted to the teens. That’s when our teammate Pat left. His young son was freezing. He wanted to stay, but he couldn’t.

So inching forward in a line of hundreds of people, we were short a teammate.

Pocketing our pride, we sought the help of La Verdad, la Libertad, la Velocidad, which was far ahead of us in line (since they didn’t have to wait for a loaner sled.) We asked if one of their teammates could hop on our team after they went down the chute. They agreed, and we were saved from having to back out of the competition. 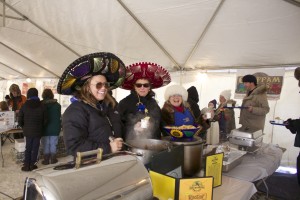 Before getting in line, we warmed up at the West Bay Rotary Chili Challenge.

As we waited in the long line of rambunctious competitors, we discussed our strategy. On the sled, we would muckle onto each other for dear life. In no circumstances would we flail our arms or legs, even when we exited the chute and were cruising across the snowy Hosmer Pond. Having seen many teams wipe out on the unforgiving ice earlier that day, we planned to do everything in our power not to spin out of control.

About halfway through our wait, we were joined by the BDN reporter Darren Fishell of La Verdad, la Libertad, la Velocidad. He would be our fourth teammate, despite the fact that his team had just survived an ugly crash at the bottom of the chute. No one had been injured, save a few bruises, and he was willing to brave the chute once more for our benefit.

Then came Troy with his guitar to serenade us as we waited on the snowy hill. It wasn’t long before he had everyone singing along to John Denver’s “Rocky Mountain High.”

All animosity between the two BDN teams, real or pretend, had vanished. I was grateful they were supporting us, standing in the cold when they didn’t have to, just so we could have the 10-second ride we’d waited all day for.

Then it was our turn. 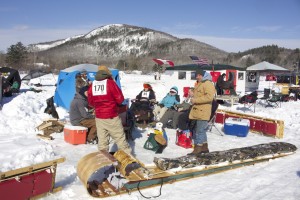 One of many Hosmer Pond encampments.

I was wearing our team bib, #403, so I sat at the front of the sled. Clutching onto a yellow rope, I tucked my winter boots under the lip of the sled and waited for my teammates to slide into place — Derek, Ashley and Darren, their legs wrapped around each other. To ensure we stayed together as a unit, we locked our arms around each other’s legs.

Positioned so, we all leaned back, trying to become as aerodynamic and stable as possible. “Squeeze together,” I yelled back to them several times. Crashes on the chute are rare, but if we became loose or shifted weight as the sled raced across the pond, we would undoubtedly crash.

The most terrifying part of the entire experience, in my opinion, is at the top of the chute. Once you’re all situated in your sled, the race organizers push your sled forward onto a horizontal wooden table. They then lift a latch and the table suddenly tilts forward, dropping you onto the icy chute.

Sitting in the front, I felt a drop in my stomach and a rush of frozen air. Looking up at a glowing grey-blue sky, tree branches swept by overhead, then came a blur of faces, the spectators lining the chute. The wooden bottom sled whirred as it scraped over the ice, picking up speed until we were hurtling along at nearly 40 miles per hour. 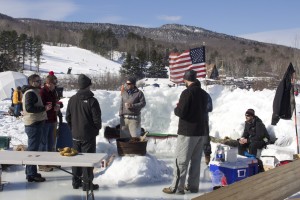 One of many Hosmer Pond encampments.

Near the bottom of the hill, I felt a bump — Ashley’s leg scraping the side of the chute, I’d later learn. It tore a hole in her pants, but in the moment, it only stung a bit.

It was only a 10 second ride from the top of the chute to the bottom. We felt a bump and were onto the pond, with all its perilous bumps and dips. Our muscles clenched as we tried to stay centered. The sled hit the side of a snowdrift and we were airborne. Thump. We were back on the ice, still cruising forward, still upright. Then we were plowing through deep snow.

All I could see was white. All I could feel was cold. All I could do was smile. We had slowed to a stop. We hadn’t crashed. And we’d had one hell of a ride. 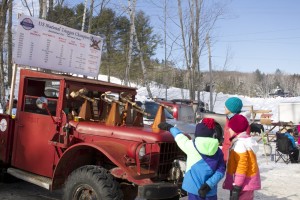 We later learned that our time was 9.67 seconds and we placed 99th place in 185 four-person teams. I’d say that’s pretty good on a loaner sled! It was certainly faster than the BDN raced in previous years.

However, the other BDN team — La Verdad, la Libertad, la Velocidad — had us beat with a qualifying time of 9.02 seconds. Their efforts paid off, and they returned on Sunday to place 37th in the U.S. National Toboggan Championships.

We owe them a drink, for their support just as much as the speed on their new sled, which they named “Velocidad de la Montaña,” or “Speed of the Mountain.”

The president came to a small Maine manufacturing town. Here’s what it looked like.

1-minute adventures moving to a new place and time

How I accidentally won a ton of outdoor survival gear

My “Dog-Friendly Hikes in Maine” book launch, talk is on June 18

How to protect yourself from ticks in Maine