Difficulty: Easy-moderate. The 3.5-mile trail travels over fairly even terrain, but it includes several bog bridges, some soggy and overgrown sections and quite a few turns as it travels along portions of old woods roads. Be sure to follow the blue blazes marking the trail. 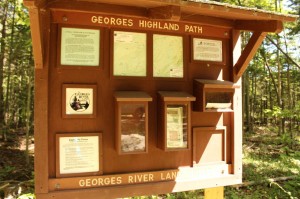 How to get there: To reach the northern trailhead, start at the traffic light in the center of Thomaston, at the intersection of Route 1 and Beechwood Street. Head north on Beechwood Street for about 2 miles and turn left at the Georges Highland Path trailhead sign to park in the Jack Baker Woods parking lot. (People also use this parking lot to hike the 6.5-mile Oyster River Bog Trail; it’s southern trailhead is a short walk down the road.) 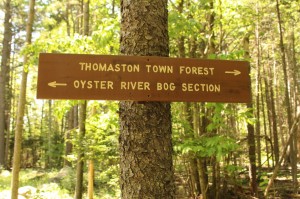 There are three parking areas at the southern end of the trail, according to the Georges River Land Trust. One is at the Thomaston Pollution Control Plant at the end of Booker Street off Route 1;  one at the water tower, along a dirt road off Route 1 across from the Strong Insurance Agency; and one is directly on Route 1 at the trailhead kiosk on the Thomaston Green, next to the Strong Insurance Agency.

Information: The 3.5-mile Thomaston Town Forest Trail travels through the 350-acre town forest that lies to the east of Oyster River in Thomaston. It’s one of the many trails that make up the Georges Highland Path, a 50-mile network of walking trails in the Midcoast region built and maintained by the Georges River Land Trust. 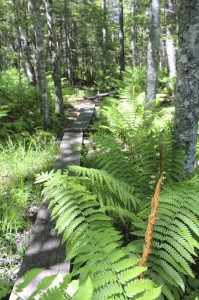 The northern trailhead starts in the 18-acre Jack Baker Woods, which was named in appreciation of an avid supporter of the Georges Highland Path since its inception in 1996.

The trail, marked with blue blazes, soon meets the first of many bog bridges. The forested wetland is filled with various mosses and ferns, including cinnamon ferns, which can grow up to six feet long.

About 0.5 mile from the north trailhead is Split Rock I, a large glacial erratic that is split diagonally. The two halves of the boulder are just far enough apart for someone to squeeze into the gap between them.

The trail crosses over several old woods roads. Signs point the way in most cases, but it can get a bit confusing, especially because sometimes the trail follows the road a few hundred feet before plunging back into the woods. Be sure to follow the blue blazes. 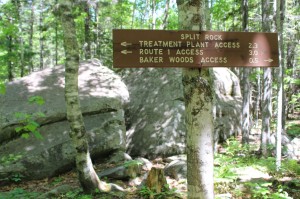 After Split Rock, the trail travels near the town’s wastewater treatment facility dispersal fields, which you’ll be able to see through the trees. Depending on the direction of the wind, a “harmless mist” from the facility will sometimes drift through segments of the trail, according to the Georges River Land Trust. The mist can be avoided by hiking on weekends and holidays, when the system is shut down, or when there is little or no wind. The system doesn’t operate in the winter months. 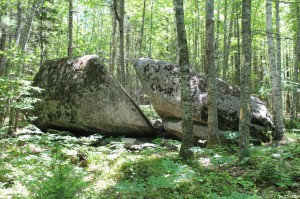 As the trail continues through the woods to its southern terminus on Route 1 in Thomaston, it crosses a few small clearings, cutting through tall grass, wildflowers and berry bushes. Many bridges have been built to span the wettest sections of trail, but prepare to encounter mud and some overgrown areas.

The trail is free to use, and dogs are allowed if on leash. For information and a map of the trail, visit www.georgesriver.org/thomaston-town-forest. 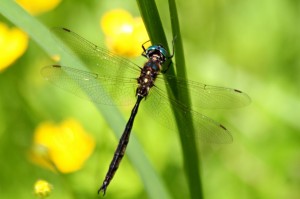 Personal note: I first visited Thomaston Town Forest on June 16, a Monday, after meeting with people from Outward Bound for a story for the BDN Outdoors. Therefore, sadly, I didn’t have my dog Oreo with me for the hike.

While I missed his company, hiking alone did give me the opportunity to stop and photograph some of the smaller details of the trail — birds, wildflowers, butterflies, that sort of thing. I especially had fun photographing a variety of dragonflies, which, when seen up close, have the most detailed and colorful patterns. 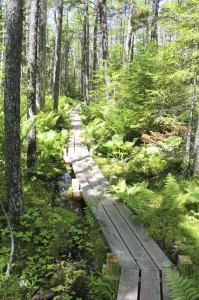 The long stretches of bog bridging, surrounded by a sea of ferns and vibrant green moss, were pretty magical. That being said, the forest was definitely buggy, even in the middle of a hot, sunny day. After all, wetlands like that are a perfect breeding ground for mosquitoes, which will lay their eggs in stagnant water. The trail also crossed a few brooks, perfect for black flies, which breed exclusively in running water. Leaving the forest that afternoon, I had plenty of evidence that I’d hiked through an abundant population of both. In particular, I recall a bite to the top of the head, a bite to a joint in my pinkie finger and a bite to the temple, which swelled to an alarming size but had shrunk back down by the time I drove away from the trailhead.

Woman found dead under Bangor bridge has been identified

April 9 evening update: The latest on the coronavirus and Maine

How to practice social distancing with birds. It varies by species.

Maine biologists will stop handling bats due to coronavirus