It’s subzero temperatures on a Saturday, around 10 o’clock. My toes are getting exceedingly too cold in my extremely underdressed Adidas. Nearby, Steve Campbell works patiently on a 1964 model Polaris Voyager. The near 50-year-old machine isn’t starting and in a couple of hours it needs to be moving on a group ride. “We’ve got the stuff to fix it,” said Campbell.

The modern shape of a snowmobile was invented in the mid 1950s by Edgar and Allen Hetteen and David Johnson of Minnesota. The machines were heavy and rather slow, initially. This team of inventors gave way to become Polaris Industries and released their first model for sale, the Polaris Sno-Traveler, in 1957. Most modern snowmobiles are made by one of four companies, Bombardier Recreational Products, Arctic Cat, Yamaha, and Polaris.

Steve Campbell has a rich history with snowmobiling. His father was a snowmobile dealer in the area which is where the Northern Timber Cruisers snowmobile club got its start. “[The club] started in my father’s showroom in ’68,” Campbell stated. 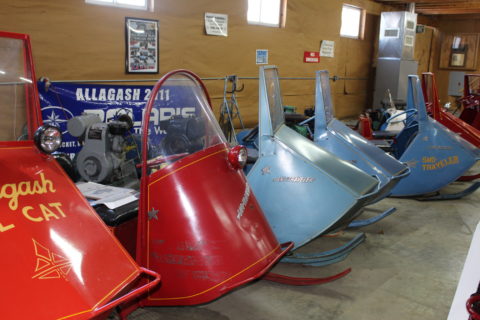 [/media-credit] A museum on the Millinocket Lake Road showcases the colorful history of the snowmobile. The museum is open every weekend.

It would be another 14 years before Campbell would get into restoring sleds. “I started restoring in ’82. There’s a lot of prototypes in here from Polaris, they tested them here from ’61 to ’66. That’s what started it. My father was a dealer in ’58, he was the fifth dealer in the country … That’s all there was in ’58 was Polaris. Ski-Doo didn’t come around until ’59,” Campbell explained.

The museum began construction adjacent to the club house in the 80s and has been a staple ever since. “We started building in ’85 and we opened it in ’87,” said Campbell. The museum has been a club project since the beginning. All fundraising is done through the club.

Today, the museum is made up of two floors with a total of 53 sleds. The collection ranges in makes and models, providing a nice sample of the sport’s history. “This is a very good collection, as good as there is in the country. Lots of variety,” said Campbell.

Out of the large collection, only one sled is owned by the club themselves. The rest are brought in for display by other people. “Most of them are owned by people who put them in here for display. There’s only one upstairs owned by the club. We try to keep everybody have individual ownership that way if anything happens to the club they just go back to the owners,” said Campbell. 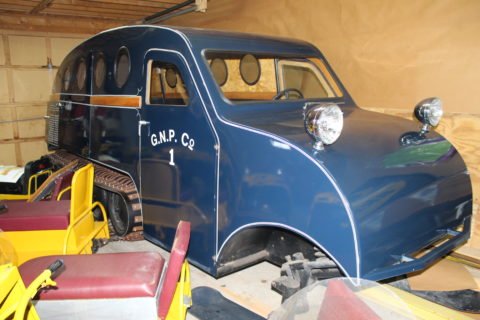 [/media-credit] Great Northern Paper’s Bombardier snowmobile formerly used to traverse the Maine forests in one of the many unique historical snowmobiles on display.

All sleds have to run when they are brought in to the club. “There’s some that’s been sitting here for quite a while – might take a little bit to make them run,” explained Campbell.

With all of the snowmobiles on display there are a few that standout among the rest. One being a behemoth of a sled that looks like something John Dillinger would use as a getaway sled after robbing an igloo. “That used to be Great Northern Paper Company’s. They used it for their phone lines in the winter time. To maintain their phone lines between their logging camps. They’d go back and forth between the camps to maintain the lines. It’s very well restored.” Campbell explained. It’s the oldest sled in the collection, being made in 1952.

In addition to Great Northern Paper’s bombardier, there’s a bright red sled on the second floor that tells an equally interesting and heartbreaking story. “Before they had the rescue sleds, we lost a little guy out here on the Stacyville Road – froze to death, and we had no way of getting him out,” Campbell explained. That incident aided in the installation of the rescue sled which now rests in the museum with a dedication to the lost boy.

The museum stays active and tries to keep the sleds moving. “We had our parade last night down Main street. Went all the way around town then back up here, about 14 miles,” said Campbell. The brisk weather affected this year’s turnout however but prior years always brought people out to view the antiques.

The museum receives lots of visitors from all over the nation. “We’ve got a book over here, the Midwest is popular. We get a lot of visitors, not as many in the summertime but it’s open every weekend,” said Campbell.

The museum is a wonderful collection of history that is a must-see for any snowmobile enthusiast. It’s open to the public every weekend and every sled in the building has a unique story to tell.

519 coronavirus cases confirmed in Maine as death toll rises to12

How to make whipped coffee

April 6 evening update: The latest on the coronavirus and Maine