In December of 2019, just before Christmas, tragedy struck the small town of Medway, Maine when 14-year-old Gage Hale passed away. In the wake of the incident, the community has remained in a state of shock and grief. Gage was halfway through his freshman year of high school. Much like a typical teenage boy, he loved being outdoors as well as playing sports. Fishing, four-wheeling, hunting, he loved it all. Gage was well-known around town and everybody liked him.

Unlike a typical teenage boy, Gage was a worker. He worked all summer at a farm in Chester to help pay for a new snowmobile. Close relative Nathan Hale commented, “When we were younger, Gage must have been just 8 or 9, our family owned a junkyard. That summer in particular I was working there full time and Gage would come help after school, pick up metal on the ground or get up in the cab of the crane with me and run the controls. Gage loved being up in the yard, he would beg me to bring him with me on the weekends or after hours just so we could work together.”

The townspeople have relied heavily on each other for support in the last few weeks and with that some incredible things have occurred speaking to the heart of not just Medway but communities all over the state. One instance was the widely covered prayer circle at a basketball game at Bangor Christian featuring neighboring town East Millinocket’s Schenck Wolverines. At the end of the game, the boys’ basketball team from Bangor Christian gathered the players as well as the crowd in the center of the gym to pray for the community and all affected by the tragedy. The circle quickly engulfed the Eastern Maine Community College gym floor. 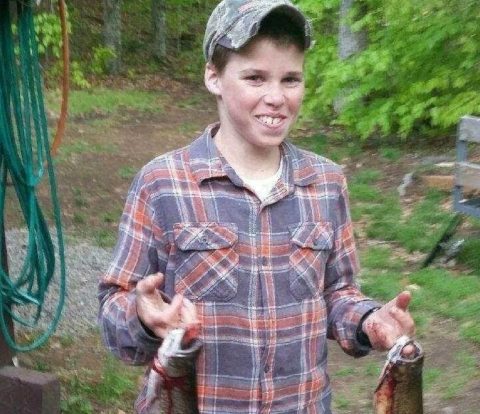 Back home, the community has sprung into action with plans to have Gage’s memory live on. His mother, Sherri Kimball, has initiated a GoFundMe page in an effort to raise money to create a scholarship in Gage’s name. The goal is set for $20,000 in an effort to cover one senior’s first year’s tuition in addition to providing a little something to every kid in the senior class. When asked to comment on the scholarship, Kimball stated “Everyone liked him, he was very easy going and just had a way about him. All the kids really liked him, I want to try every graduation year give something to each kid until the year below his graduates.” Kimball went on to elaborate that in addition to fundraising for the graduation scholarship, she would like to set up the ability for people to donate to the food pantry at Tri-Town Baptist chuck of East Millinocket in his name.

In addition to the GoFundMe page for fundraising, the community has jumped at the opportunity as well. There are various items for sale including remembrance bracelets with Gage’s name on them. These are for sale at various local businesses including Rick’s Market and the Saw Mill Bar and Grill. In addition to the bracelets, there are larger items like sweatshirts and t-shirts.

Feb. 29 there is a memorial snowmobile ride planned by Gage’s brother Gaven in his memory. It’s slated to begin at the Sno-Rovers Snowmobile Club in Medway, ME at 9 a.m. T-shirts will be available for purchase at the ride along with other fundraising efforts. “I plan on putting a raffle together and working on some other projects to help raise money,” stated Medway local Martina Morris. The town is dedicated to keep Gage’s memory alive as well as help out students in the future.

As of this writing, the group putting on the memorial ride is currently looking for donations from local businesses for items and services for a silent auction. The auction will take place at the memorial ride starting point located at the Sno-Rovers Snowmobile Club. Some items already acquired for the auction are gift cards to local businesses. The group plans to speak with Bangor based businesses as well to gather more items to be auctioned and raffled off.

In the face of tragedy, the tri-town area of Medway, East Millinocket, and Millinocket have banded together to do something good for the community. It’s an impressive feat to be determined to give something back to the community while still grieving for a life taken too soon. Be on the lookout for more events and fundraising efforts regarding Gage’s scholarship on the pages dedicated to his memory located on Facebook and Instagram.

Passenger dies after jumping off I-395 bridge into Penobscot River