Blackened Thrash Metal is a mouthful to say comfortably and if you’re not a metal head, I’m satisfied these words combined cause a plethora of questions. As touched on in my previous piece regarding Bangor’s own Holy Filth, thrash metal is an aggressive subgenre of extreme metal filled with pounding drum rhythms and fast-paced, shredding guitar riffs.

Black metal is a different type of goat all together. It’s filled with blast beats, which is an extremely up-tempo drum beat, as well as high-pitched, shrieking vocals and alternate picking, distorted guitars.

When you combine elements from both of these harsh subgenres, you get the vitriolic blackened thrash metal. Some of the more popular bands in this abrasive style are 1349 and Aura Noir. This style can also be found in Bangor’s own Psonen. 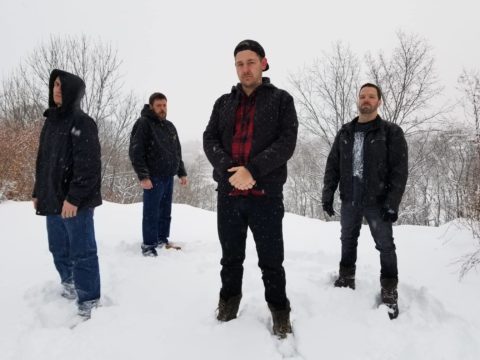 Psonen is a five-piece band formed in June of 2018 after founding member Patrick Kinkade’s previous band, Tushuva, broke up. The band is made up of Kinkade and Jason Snow on guitars, Stephen Baxter on drums, Jason Violette on bass, and Andy Eisentrager providing vocals. The band’s name translates to Snow-Bringer – an eagle-spirit that makes snow by opening its wings. Snow-Bringer is part of the local Abenaki people’s mythology.

The group pieced themselves together carefully, taking influence from a variety of different styles of heavy music including speed metal and the new wave of British heavy metal. Instrumentally, I would compare their sound to a sped up version of Iron Maiden. The vocals, however, fall further on the black end of the spectrum with a shrieking quality to them that’s reminiscent of Mayhem sprinkled with a flavor that’s all their own.

The band went through a few lineup changes early on due to members moving out of state and other family related matters. Kinkade elaborated, “We did have a female singer for a while but she moved back to California to pursue a career in acting. Our original bassist had to leave the band to concentrate on his family and newly born daughter.” The band pressed on, despite these lineup changes until settling in as their current five-piece.

With the current lineup, songwriting has streamlined to an effective, collaborative process. Kinkade elaborated, “I write the rhythm guitar parts and the basic structure of the song and then work it out with Stephen (drummer). From there we see what works and what doesn’t, add bass lines, harmonies, leads and then Andy takes his lyrics and molds them to the song. We rehearse, troubleshoot, and repeat until the piece is right.”

The band released a three-song demo self-titled last October on their Bandcamp page. The songs are moderate in length, each one in the five to six-minute range. As far as production goes, the songs do not have the quality of a demo with a clean sound that’s typically not found on a black metal record. If I’m being honest, most black metal records sound as if they were recorded on blown speakers that were submerged in water. Lo-fi is the standard, but Psonen blasts through the standard to make a record that’s easier on the ears.

The band tries to gather on a regular basis. Kinkade said, “We try to practice twice per week and play shows generally once per month.” When they go to record music, everything else moves to the back burner to focus on creating. Kinkade said, “We record where we practice at The Nest and do it all ourselves.” The group is currently putting together a collection of five songs for a new EP this spring. “Our songs are getting heavier, more technical and more challenging and that’s the way we like it.” Stated Kinkade.

When the band plays out, the setlist changes from show to show. Kinkade stated “We actually have enough songs now that we have to start cutting some from the setlist.” They play with song orders and experiment with what flows best. When the band does play live, it’s all original music with no cover songs included. The band has no plans on touring anytime soon due to attempting to coordinate five band member schedules, each member is quite busy in their own right with balancing their own families and full-time day jobs.

Psonen remains optimistic for the future, Kinkade went on “The future is very bright as everyone is very pleased with the way things have progressed in our short time together. We all enjoy creating and performing our songs together.” The band’s first three-song demo is available right now on their Bandcamp page for purchase with their new EP coming soon in the next few months.

March 30 evening update: The latest on the coronavirus and Maine

How to celebrate a birthday in the time of COVID-19

Bar Harbor suspends ‘nonessential’ lodging for most of April