After a decade, The Brad Hutchinson Project’s fan base continues to grow

Jam bands are bands that play songs made up of a great deal of improvisation (or “jams”) over chord progressions and a groovy rhythm section. A jam band’s sound is typically comprised of a beautifully mixed blend of folk, country, rock, and jazz with each band leaning more towards one style than the others. Maine has a rich history of ties to famous jam bands, the most famous being Jon “Fish” Fishman, the drummer for the musical juggernaut Phish, is a town selectman for Lincolnville. In addition, Phish have had numerous multi-day festivals in Northern Maine at Loring Air Force Base in Limestone. Over the course of these festivals, the large influx of people caused Limestone to be the largest cities in Maine for those days.

Among the surface ties to Maine, there’s also a local music scene. The Brad Hutchinson Project has been truckin’ through the state of Maine for the last decade. The core band is a trio comprised of the band’s namesake Brad Hutchinson on guitar and vocals, Cory Hill on piano and vocals, and Peter Jamieson on drums. Depending on where their gig is located, the group brings on special guests as well to jam with.

The group got their start in 2010. Brad Hutchinson had been playing solo shows when we’d heard Cory had moved back into the area and invited her to an open mic event. “Cory and I went to school together and were involved in the music program so I knew she could sing and play piano. Immediately after the open mic we started playing duo shows,” said Hutchinson. 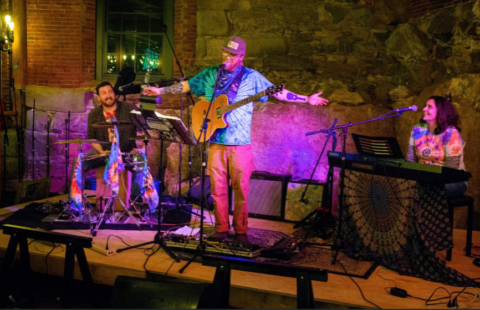 Peter was added into the mix later on after seeing the duo perform and offering to sit in whenever they were in the area to jam. “After a couple of shows [Peter] was hooked and became our full time drummer/percussionist,” said Hutchinson.

The band is unique compared to other bands I’ve covered, not just in musical style and genre, but in how they approach live performances. “We don’t do setlists unless it’s a special event/function and we have a short set. We have a catalog of songs that we can rotate in and out of depending on venue and crowd,” said Hutchinson.

Peter Jamieson elaborated on this, “We don’t use one at all! Brad puts the whole show together on the fly. He has a real talent for feeling a room and playing to the crowd. That’s what keeps this group so exciting. We never know what’s going to happen next but we get there together. It’s always a surprise!”

Each member of the group has their own unique background of influences. “I grew up playing jazz in school and later got into playing rock and blues. I love funk and hip hop grooves too. It’s fun to mix such a grab bag of styles into how we portray the Grateful Dead covers and BHP originals alike,” said Jamieson. Hutchinson also mentioned the Grateful Dead as a major influence as well as Trey Anastasio (guitarist and vocalist for the previously mentioned Phish) and Chris Robinson of The Black Crowes.

Hill, while also noting the Grateful Dead’s influence, touched on different influences, “For me the singer/songwriters of the late ‘60s and ‘70s. That’s a major aspect but there are others including blues and country.”

Initially sticking to venues in Central and Northern Maine, the band has been making great effort to trudge through the cold rain and snow to gigs all over the state. “We gig regularly … branching out and playing more in Mid-Coast, Western, and Southern Maine,” explained Hutchinson.

The group plays a lot of shows, usually one or two every weekend, and they don’t plan on slowing down anytime soon. “The future of the band is looking bright…We do play original music and we have talked about writing as a group with the idea of releasing an album but we’ve just been so focused on playing as many shows and new places as possible that it doesn’t leave much time. We all have day jobs and families but at least the idea is there and will become a reality in the near future,” said Hutchinson.

The Brad Hutchinson Project is keeping the spirit of the Grateful Dead alive here in Maine. If you’re a Deadhead and want to hear some fantastic renditions of the tunes you know and love as well as some great originals, be sure to check the band out at their next show.

May 27 morning update: The latest on the coronavirus and Maine