Welcome to Day 10 of the Maine high school basketball tournament!

While one class finishes up the final semifinals of the tourney, six teams will be crowned regional champions and move on to the state finals.

Follow along here for the latest game scores, stories and more.

And they’ve put 1.9 seconds back on the board

Parker Ponte, all alone on the right wing, buries a 3-pointer with 2.7 seconds left to give Dexter a 55-52 lead. Unknown how much time is on the clock,which shows 0.0

Nathan Richards has 29 points for Dexter

Dexter has settled into a good rhythm at both ends. Fort Kent appears tired and can’t get even close-range shots to fall. The Tigers lead 52-45 with 4:51 left

Dexter gaining traction as Fort Kent’s energy seems to be fading a bit. The Tigers lead 46-41 through three quarters

1:17 remaining in the third quarter. Fort Kent and Dexter are tied 41-all

Since Dexter held teams to 33.-something points per game this season, the 31 first-half points by the Warriors might be the most in a half against the Tigers all season

Fort Kent boys clearly not intimidated by unbeaten Dexter. The Warriors are dictating a quick tempo and lead this C North semifinal 17-9 after a quarter

The North semifinals in Bangor come to a close with the next game. It’s No. 2 Dexter against No. 3 Fort Kent for the right to play Central Aroostook in the Class C North championship game tomorrow night

GSA is a tad shorthanded as Milos Sujica, who was having a terrific game, fouled out with three minutes left in regulation

Central Aroostook turns it over and GSA gets the ball. CAHS foul. No bonus yet. GSA ball in the frontcourt 2.4 seconds left

Up next in Portland, No. 1 York takes on No. 3 Falmouth in the Class A South boys final.

They will play Hampden Academy in next week’s state game.

Greely still trails behind Marshwood at 20-16.

Marshwood leads 18-13 with five minutes left in the first half.

Marshwood holds onto a 13-10 lead against Greely at the start of the second quarter.

Marshwood leads 7-2 over Greely in the first quarter.

Class C North semifinal: No. 1 Central Aroostook (15-4) versus No. 4 George Stevens Academy (18-2) coming up from the Cross Insurance Center.

Coming up at 6: No. 1 Hampden vs. No. 2 Gardiner for the Class A North girls basketball championship.

Stearns limits Calais to 17 second-half points and pulls away for a 52-42 victory to earn a spot in Saturday’s 7 p.m. regional final against Central Aroostook

Maranacook leads 52-41 with two minutes left in the Class B south boys final.

Stearns has gone into bleed the clock mode. The Minutemen lead Calais 47-40 with 1:45 to play. The Alley sisters have gotten into the offensive flow this period, including two 3’s by Alisyn

Maranacook leads Wells 50-37 with 4 and a half minutes left.

At the start of the fourth quarter, Maranacook leads Wells 42-34 in the Class B South boys final.

Annalys Robinson scored nine points for Stearns in the period

Stearns made its move and led by seven, but it’s now a 34-30 lead over Calais through three quarters

Alisyn Alley drains a 3, giving Stearns a 30-27 lead over Calais midway through the third quarter. Foul trouble for the Minutemen

Annalys Robinson making her presence felt down low with five points to open the second half and Stearns has cut the deficit to 26-25 with 5:55 left in the third quarter

Maranacook boys leads 31-21 at halftime in the Class B South final.

Alisyn Allen and Katie Alley are a combined 3-for-16 shooting for Stearns, which has outrebounded Calais 25-23

With the first quarter over, Maranacook is ahead 18-13.

Maranacook leads Wells 16-11 with a minute left in the first quarter.

Stearns finally gets back on the board after a 13-0 Calais run, but the Blue Devils lead 21-15 with 4:18 to play in the second quarter

Lauren Cook makes three consecutive steals and cashes in with layups on each one, sparking Calais to a 17-13 lead after one period against Stearns in this C North semifinal

The winner of this one gets Central Aroostook, which knocked out Dexter 35-32, in tomorrow’s 7 p.m. North championship game

Stearns advanced to the semifinals by beating Central of Corinth 63-40, while Calais posted a 51-33 quarterfinal win over defending C North champ Penobscot Valley of Howland.

Up next in Bangor it’s No. 1 Stearns against unbeaten No. 4 seed Calais. This should be a good one!

Then a 5-second call out of bounds gives the ball back to Dexter in the frontcourt down three, 6.1 to play

Central Aroostook runs a clever inbounds play for a layup. Leads Dexter 35-32 with the ball and 6.1 seconds left. 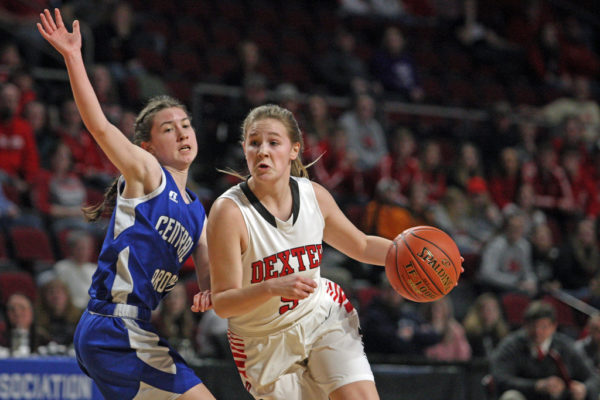 Driving to the basket is Dexter’s Peyton Grant, right, while defended by Central Aroostook’s Maci Beals during Friday’s Class C North semifinal at the Cross Insurance Center in Bangor.

33.1 seconds left. Central Aroostook has a 33-32 lead and the ball. Dexter needs to foul three more times to even put the Panthers at the foul line for the bonus

Dexter leading Central Aroostook 32-31 with 1:36 left. CA has the ball

Dexter girls had the lead and the ball and Central Aroostook was content to let the Tigers run the clock for a while. Then Dexter turned it over. 1:36 to play, Dexter 32, CAHS 31

Wells leading 30-23 against Yarmouth with 6 minutes left in the fourth quarter.

Yarmouth trails behind Wells 25-21 at the end of the third quarter.

Wells leads 25-20 against Yarmouth in the third quarter.

Wells is leading 24-20 at the beginning of the second half.

Central Aroostook girls have biggest lead at 24-18 over Dexter with 6:52 left in third

Central Aroostook by one over Dexter at the half

At the end of the first quarter, Central Aroostook leads Dexter 10-9 in the Class C girls semifinals.

At the end of the first quarter, Wells leads Yarmouth 15-7 in Class B South girls regional final.

April 6 morning update: The latest on the coronavirus and Maine