There’s only one way Bernie can win 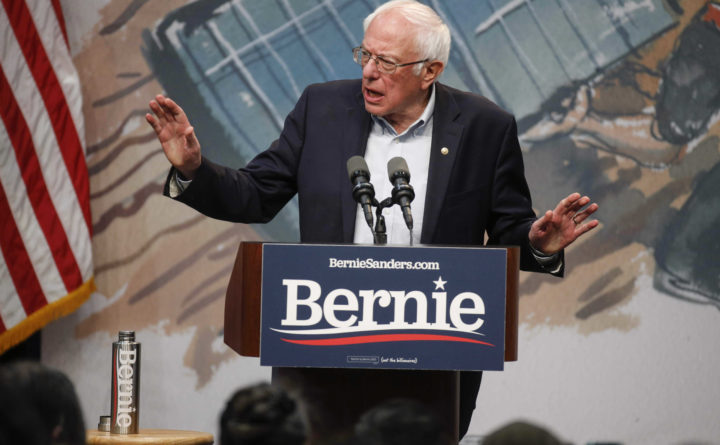 I love Bernie. Of course, I do. I’m a Millennial.

Born into a white middle-class suburban family in 1986, I graduated college in 2008, tumbling out of sixteen years of education into one of the worst economic climates in decades.

Today, after a decade of us “rebounding” from the Recession, there are now more places than ever hiring folks to do menial labor for chump change. But, when it comes to the kind of jobs that my parents and others like them raised our families on, those are still in frighteningly short supply. While our nation’s latest crop of billionaires keep raking in absurd sums, lots of my peers are barely making ends meet. Of course I support Sanders in his calls to dramatically hike taxes on the new uber wealthy and redistribute their money to the rest of us.

I also haven’t had particularly affordable access to healthcare since I aged off of my mom’s insurance seven years ago. I currently carry a relatively expensive Healthcare.gov plan, but despite its high cost, unless I get hit by a truck, it isn’t likely to be very useful given how lofty the deductible is. The last time I needed to see a doctor, I had to pay hundreds of dollars out of pocket for a routine visit. I’d happily pay a little bit more in taxes if it meant that the clinic in our neighborhood were to become as free and easy for my wife and I to access as a public street or a public school. How could I not support Medicare for All? It’s going to go a long way toward enabling folks like me to remain healthy.

And it’s not just about the economy and access to healthcare, my wife and I just got married a few months ago, and the conversations that we’ve been having about having kids are frankly pretty scary. If we do have children, what sort of world are they going to inherit? Climate change isn’t a hypothetical to our generation; it’s an impending reality. If world agriculture gets impacted in a devastating way, will kids like ours still have enough to eat?

Like Greta says, young people today need more than the kind of vacuous, amorphous promise of “hope and change” that carried Barack Obama into the White House in 2008. We want substantive, far-reaching government action, and we want leaders with the guts and the backbone to champion our interests, no matter how many political donors they piss off in the process.

In 2011, my generation watched on YouTube as local police forces tear gassed Occupy! encampments, and this year, a lot of us have been sharing links on Facebook to videos of the Chinese government viciously attacking young protestors in Hong Kong. We know that the kind of political work that needs to happen now is going to be met with resistance, and we know we need a fighter like Sanders, not just an academic, a good old boy, or a pretty face, to lead the way here.

That’s a lot of why, among voters like me who are under 35, Sanders crushes Biden 52 percent to 11 percent. If people my age were the only ones voting, Bernie Sanders would be the next President of the United States. Game, set and match. For all practical purposes, the election would already be over.

The problem for us is that, among voters over 65, the inverse is true: Biden wallops Sanders, 28 percent to 4 percent.

I think there’s probably a number of reasons, but when I talk to a lot of the seniors I know, the biggest thing about Bernie that they seem to dislike is his “tone.” The guy’s a hippie with unkempt hair. A bellicose street fighter. When they were suiting up and signing the 30-year mortgages on the suburban houses that a lot of my generation grew up in, Sanders was up in Vermont, saying he wanted a revolution and possibly smoking pot (although, for what it’s worth, he claims he only smoked pot twice).

For a lot of Boomers, success has come from showing up, day after day, to the same job – working within “the system,” not raging against it. Most Americans over 65 own stock, and a lot of them live, at least partially, off of those investments. Wall Street isn’t just the lifeblood of the super rich – retirement funds are also how a lot of middle class seniors support themselves, and it can matter a lot to them if the market goes up or down. Above all, for many who grew up amid the cultural upheaval of the sixties, maturity has brought an acceptance of just how futile and dangerous a lot of fringe efforts can be.

So what are we Bernie folks to do?

One thing is clear, unless Bernie starts polling a lot better among senior citizens, things don’t look good for this campaign. Almost a third of likely Democratic voters are over 60; we can’t just shrug them off and try to make the loss up among other demographics. There’s too many of them.

The only answer, as the great radical folk singer Joe Hill would say, is: Don’t mourn, organize!

I take every poll with a pretty big grain of salt, but as I choose to see it, if only 4% of seniors rank Sanders as their first choice, all that means is that there’s 96% of seniors who don’t support him yet. Perhaps, a time may come when the campaign reaches some sort of saturation point, beyond which any additional effort to reach seniors will prove fruitless, but we aren’t anywhere close to it yet. I believe strongly that there’s still lots of voters in the “Over 65” demographic who can be brought around to supporting Sanders. It’s just a question of how best to reach them.

One place to start might be looking at Trump’s 2016 campaign, especially the way in which he used nostalgia to motivate voters. Remember when America was great? His campaign constantly reminds us. It can be again! Lots of people love this sort of message, seniors especially.

But can Sanders tap into this sort of nostalgia?

Absolutely. In 1958, 73% of Americans reported that they trusted the government in Washington “always or most of the time.” Today, that number is at an all time low of 17%. Not everybody agrees with Bernie’s politics, but nobody whom I’ve ever talked to thinks the guy is a lying brown-noser who just spouts off whatever the latest polls say that voters want to hear. Remember when you trusted the government in this country to be honest with you? Bernie remembers.

When it comes to the economy, do you remember when a fair day’s work meant a fair day’s wages? When Trump was elected three years ago, 76% of Democrats said that the U.S. economic system unfairly favors powerful interests; today it’s above 84%. These days, almost 80% of American workers live paycheck to paycheck, a far cry from the savings that many Boomers were able to accumulate over their careers. Sure we can talk about unions. But I don’t think we actually have to. We don’t even have to talk about building a bold and brave new world. We just have to tap into nostalgia and a return to economic sanity.

When it comes to healthcare, do you remember when high quality medical care was relatively easy for most folks in this country to access? In 1970, the average American spent $119 a year on healthcare. Today, it’s almost ten times that; even when you adjust for inflation, the cost of healthcare has still more than doubled. Pretty much all of us today know people who are racking up massive debts or going without elective procedures due to financial constraints. I haven’t met anybody, including ardent Trump supporters, who thinks our country’s current healthcare system is anything short of a disastrous mess.

Personally I love the specifics of Medicare for All, but I can’t help but wonder if maybe we don’t actually need to talk about whether the system ought to be public or private. At least not in every conversation. For a lot of folks, that’s a wonky thing. Just show old stock footage of doctors and hospitals, and people will fill in the dots for themselves. Remember when the healthcare system used to just kind of work in this country? Bernie remembers.

As I see it, social commentators aren’t totally wrong when they say that, if we want to get seniors to the polls, we have to offer them something safe, sane and old-fashioned, something that evokes warm feelings of yesteryear. But, even if that isn’t the first thing that comes to mind when young people like me are asked to describe Sanders, that doesn’t mean that he isn’t also those things.

Political leaders like FDR and LBJ used to fight for real things – it’s the corrupting influences of big money, which nobody on any side likes, that changed that. There’s nothing “crazy” or “fringe” or “extreme” about Sanders or the policies that he’s calling for. What’s insane, on both sides of the aisle, is the status quo.

In order for Sanders to win, he needs to escape the marginalizing “lefty radical” box, which many Americans, include many of his supporters, currently associate him with, and emerge as the sane, traditional, old-fashioned, “return to normalcy” candidate. The good news is that, to do so, Sanders himself doesn’t have to change. The only thing that needs to change is how a lot of us are talking about him.

Passenger dies after jumping off I-395 bridge into Penobscot River

After learning of Whitey Bulger LSD tests, juror has regrets