Maine Election 2019: Get the latest results throughout the state

Stay with the BDN for the latest election results from throughout the state.

Virginia Democrats continued their winning streak under President Donald Trump on Tuesday and took full control of the Statehouse for the first time in more than two decades.
Read more here:

With 446 of 582 precincts reporting, both statewide questions on the ballot are heading to passage with comfortable margins — Question 1, 76.5 percent; and Question 2, 75.9 percent.

In Westbrook’s Battle of the Mikes, Foley came out in top in the race for mayor with 1,156 votes, beating three contenders.

Democrats caucused to nominate City Councilor Foley, but incumbent Mike Sanphy and 2016 runner-up Michael Shaughnessy, both Democrats, ran against Foley and Republican Phil Spiller. Sanphy and Spiller have praised each other while Foley, Spiller and their allies have squared off with one another.
Read more about Westbrook’s race here:

In a race charged with discord between an incumbent and an insurgent city councilor, a third candidate — Kate Snyder — looked to be the last one standing in Portland’s mayoral election on Tuesday, unseating Mayor Ethan Strimling in Maine’s largest city.
Read more:

The first round is over in the Portland mayoral race and it looks like @KateforMayor will take it. We're going to await the final count, which should come in a half-hour. #mepolitics pic.twitter.com/uH1EsF0P9O

In Ellsworth, Marc Blanchette has won re-election to the City Council, while newcomers Michelle Kaplan and Robert Miller also have won seats on the 7-seat board. Mathias Kamin and 3-time candidate Gene Lyons came up short. #mepolitics

Camden will establish a procedure for obtaining licenses to operate recreational marijuana-cultivation businesses after voters approved a referendum here tonight by a vote of 694 to 217.
Read more here:

Bar Harbor voters have said yes to formally allowing residents to rent out rooms in their homes. The vote was 628-175.

Residents of this tourist mecca have been renting out rooms to people on vacation for years, even though the practice technically has been banned by local ordinances. Tuesday’s vote allows rentals for between five and 30 days at a time.

It is just one way the town hopes to get a handle on the practice of renting out rooms and houses to people on vacation, which officials say is a significant factor in a housing affordability crisis marked by lack of employee housing and the demand for vacation rentals

Bangor voters have returned an incumbent to the City Council and chosen three newcomers, including an immigrant from Nigeria.
Read more here:

The winners of Tuesday’s election, Marwa Hassanien and incumbent Carin Sychterz, will each serve three-year terms on Bangor’s School Committee, which has seven members.
Read here:

Bangor voters have approved a proposal to raise up to $6 million for an extensive renovation of City Hall, with about 60 percent of voters backing the rehab.
Read more here:

Safiya Khalid, 23, received 69.9 percent of the vote, according to unofficial results. She is the first Somali American to win a seat on Lewiston’s City Council.

East End and North Deering are in and @KateforMayor is your early leader in the Portland mayoral race. #mepolitics pic.twitter.com/56Pesavz0c

Read Troy R. Bennett’s profile of Safiya Khalid, who was elected Tuesday to the Lewiston City Council. She is the first Somali American to sit on the council.

With 61 of 582 precincts reporting, about 72 percent of voters are backing the bond question.

Meanwhile, one of the races to watch nationally is in New York City, where voters will decide whether to switch to ranked-choice voting. That comes three years after Maine voters opted to make the switch for statewide races and a year after Maine completed its first ranked-choice race in the 2nd District.

The results are in from Glenwood Plantation up in Aroostook County. No votes were cast.

The polls are closed in Maine.

Less than 10 minutes until the polls close. 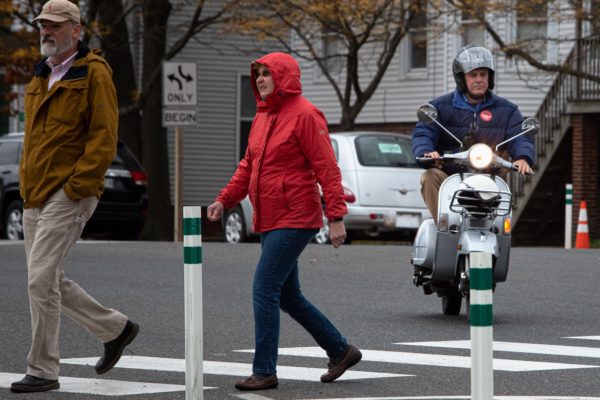 I smell a Pulitzer. Pass the red pepper flakes

If only reporters could do a fun enterprise/feature/kicker story on the exponential increase of pizza sales on election night.

Could Slugger the Sea Dog be a dark horse candidate in this year’s mayoral contest in Portland? Stay tuned. 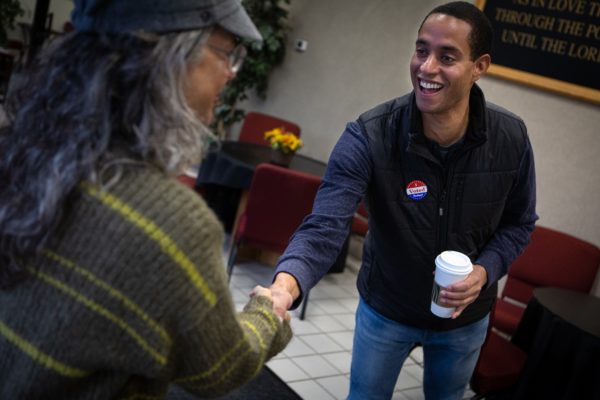 Weirdest Election Day story so far in #mepolitics: @MESecOfState tells me a closed food truck near the Westbrook polling place made a Facebook post promising a free meal to people who voted for the Republican mayoral candidate.

It appears to have been taken down.

This dog got every single vote for mayor at his polling station in Portland today. I'm predicting a landslide win. #mepolitics #fidoformayor @bangordailynews pic.twitter.com/9FqZxRQlPC

On assignment for the @bangordailynews: Portland mayoral candidate @KateforMayor shakes hands outside the Grace Baptist Church on Summit Street this morning where residents were casting their ballots. #MEPOLITICS pic.twitter.com/GapWTaAnRP

Polls close in about 44 minutes. Time to cast those ballots if you have them.

Welcome to the BDN’s election 2019 live blog. We’ll bring you the latest updates and results from this year’s races from across the state.

We want to hear your Maine mountain lion stories

HE SAID IT RIGHT

Maine wants to expand broadband, but expense and rural buy-in stand in the way

Paul LePage might run for governor again in 2022, but he isn’t running yet