Live blog: The Maine Legislature is back and trying to finish its work

The Maine Legislature is back in Augusta on Thursday for the first of a planned two final days of the 2018 legislative session. Lawmakers will handle a ream of proposed child welfare reforms from Gov. Paul LePage, conforming Maine to the federal tax code and other issues.

Follow along here with the Bangor Daily News staff throughout the day as the Legislature wades through its work.

The Senate is in. The upper chamber came in just after 10:25 a.m. — about 25 minutes behind schedule, which isn’t bad in the State House. Read our preview of today’s session and stream the Senate session here and the House session here when it starts.

A top lawmaker called Chris Cousins ‘one of the best that this building has ever seen.” Chris Cousins, the BDN State House bureau chief who died earlier this month at age 42, was remembered on the Senate floor this morning by Senate President Mike Thibodeau, R-Winterport, Sen. Eloise Vitelli, D-Arrowsic, who was a longtime friend, and Sen. Eric Brakey, R-Auburn.

Thibodeau called him a “terrific human being,” a reporter who was trusted by many and “one of the best this building has ever seen.”

The House is preparing to come into session for the first time today. As has been the case throughout most of the 128th Legislature, it’s the chamber where conflicts are most likely to erupt today.

The House had been scheduled to convene at 10 a.m. But partisan caucuses took longer than anticipated, so on this day, “legislative time” in the lower chamber is about two hours behind Eastern Daylight Time.

The House has quickly moved into a potentially contentious area. Rep. Paula Sutton, R-Warren, is introducing her measure to seek an investigation of Rep. Dillon Bates, who resigned last week after allegations of misconduct with students. Sutton wants the House Ethics Committee to launch an investigation.

Democrats have moved to delay consideration of Sutton’s request. Republicans asked for a roll call vote on tabling the motion.

The time away appears to have done little to ease tensions in the lower chamber. Rep. Larry Lockman, R-Amherst, stands to ask if voting to table Sutton’s measure constitutes “covering up the cover-up.” House Democratic Leader Erin Herbig, D-Belfast, standing in for Speaker Sara Gideon, D-Freeport, quickly rules him out of order.

The two top House Republicans — Minority Leader Ken Fredette of Newport and his assistant, Ellie Espling of New Gloucester, voted with Democrats to effectively kill a proposed ethics investigation of Gideon’s response to the Bates allegations.

A little history: The House Ethics Committee has not met since 2009. The committee convened in 2009 at the request of then-Speaker Hannah Pingree, D-North Haven, to investigate allegations that then-Rep. Richard Blanchard, D-Old Town, attempted to use his position to avoid a citation for illegal fireworks. That investigation found Blanchard’s behavior “unbecoming to a state representative” but cleared him of improperly using his position to influence law enforcement officers.

The House is now paying tribute to Chris Cousins. You can watch here: http://legislature.maine.gov/Audio/#house_chamber

The House is now moving on to vote on a proposal to adjust Maine’s tax code in response to federal changes.

The House voted 111-0 to pass the tax conformity bill. It now goes to the Senate, where it is also expected to breeze toward passage.

The House is spending quite a bit of time discussing a request by Rep. Henry Bear, tribal representative of the Houlton Band of Maliseets, to ask the Maine Supreme Judicial Court to offer a solemn occasion opinion on whether existing federal law could be interpreted in a way that would allow tribal casinos in Maine.

Maine’s high court could weigh in on whether a tribe can build a casino without state approval. The House voted 70-54 to pass an order from Rep. Henry Bear of the Houlton Band of Maliseet Indians that has been months in the making and could be one of the major events of the day.

It would ask the Maine Supreme Judicial Court to offer an opinion on whether federal law could be interpreted in a way that allows tribes to build casinos, which now can only be done here through referendum or with legislative approval. Tribal casinos have historically found little support in the Legislature.

The Senate just voted unanimously to authorize the installation of a Gold Star family memorial in Capitol Park, across the street from the State House. Earlier today, the House had endorsed the proposal.

The Senate is now debating the biggest subject of the day — five child welfare bills from Gov. Paul LePage. Most of them are expected to bounce between the chambers for final votes today.

A major bill providing extra funding for the child welfare system passed the Senate unanimously. In what is likely to be the most consequential legislative move today, the Senate unanimously gave initial approval to a $21.2 million package to enhance Maine’s embattled child welfare system. Of that, $19.5 million would come from the state budget and the rest would be federal funds.

It includes $8 million to replace an outdated information system, $3.7 million in raises for caseworkers, $2.6 million in pay increases for foster families and funds 16 new caseworker positions. The bill now goes to the House. 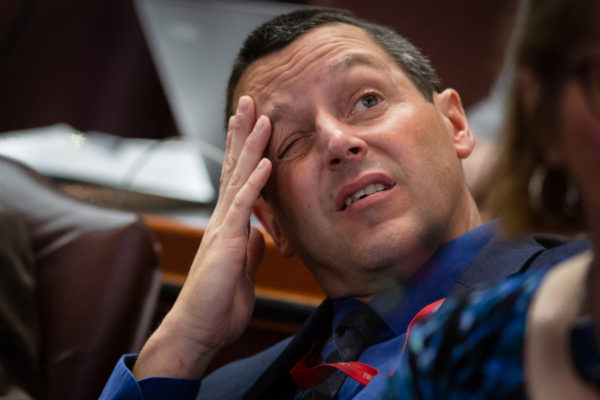 Rep. Scott Strom, R-Pittsfield, watches a vote come in at the State House in Augusta on Thursday. 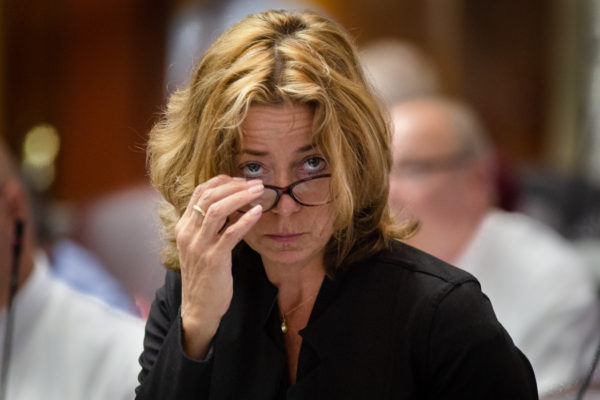 Rep. Paula Sutton, R-Warren, reads to the House from its code of ethics at the State House in Augusta on Thursday.

The errors and omissions bill that has been at the heart of legislative gridlock continues to be a sticking point. Senate President Mike Thibodeau is making an impassioned speech to express his opposition to the way it has been handled since May.

Specifically, the latest effort to resolve the impasse over the errors and omissions bill appears to be based on removing from the bill a language fix about the Maine Clean Election Act. That fix became a moot point after a Superior Court justice and the Maine Ethics Commission took steps to release millions of dollars to publicly financed campaigns.

Maine’s secretary of state needs more money to run the 2018 election. The day was running smoothly in Augusta until Secretary of State Matthew Dunlap dropped a surprise to lawmakers. Dunlap spokeswoman Kristen Muszynski said his office needs roughly $334,000 to print ballots, lease software and a high-speed scanner and pay for courier services for the November election.

Dunlap, a Democrat, will go before the Legislature’s budget committee on Thursday at 5 p.m. to air that issue.

Maine’s secretary of state needs more money to run the 2018 election. The day was running smoothly in Augusta until Secretary of State Matthew Dunlap dropped a surprise to lawmakers. Dunlap spokeswoman Kristen Muszynski said his office needs $334,000 to print ballots, lease software and a high-speed scanner and pay for courier services for the November election.

Dunlap, a Democrat, will go before the Legislature’s budget committee on Thursday at 5 p.m. to air that issue.

The House has returned and launched into an animated debate about a bill to shift the Department of Health and Human Services’ policy away from family reunification in cases of suspected child endangerment. In general, Democrats are urging that House members vote “ought not to pass” on a bill from Gov. Paul LePage that aims to de-emphasize family reunification.

The House debate over policy language changes related to de-emphasizing family reunification has gone on for more than an hour. It is still going. Many House members have spoken more than once.

After almost two hours of debate, the House agreed with the Senate and supported a bill that would de-emphasize family reunification in cases where children are endangered. The House then moved to quick votes to increase funding and make other changes to the child welfare system.

The Appropriations Committee convened at 7:30 p.m. to hear Secretary of State Matt Dunlap’s request for more than $300,000 for general election needs in November.

The House has recessed, with an expected return of 8:30 p.m. At that time, members hope to wrap up work for the day, including final votes on child welfare bills and any action on the election funding recommended by the budget committee.

We are going to pull the plug on this live blog. Thank you for your attention. Have a delightful evening. Expect a recap story to post after lawmakers complete the day’s work.

Island residents and Old Town grapple over rights to land

The fundraising gap is narrowing in Maine’s vaccination campaign

Paul LePage says he was paid $7,500 last year to advocate for CMP corridor