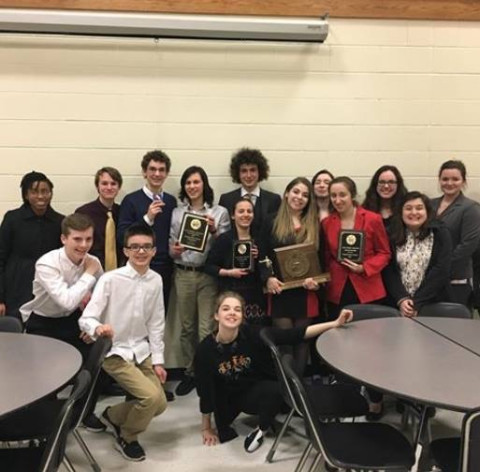 BANGOR — The Bangor High School Debate Team repeated as State Champions on Saturday, January 28 at Brunswick High School. Each year high schools from around the state compete in regular season tournaments on Saturdays between October and January, culminating in the Maine Forensic Association State Championship Tournament, sponsored by the Maine Principals’ Association.

Over 300 debate and speech team members from thirty schools gathered at Brunswick High School for this competition. Two styles of debate were offered at this tournament: Public Forum debate, which features two person teams debated whether or not to increase military spending, and Lincoln-Douglas debate, which consists of a single debater debating another student on an ethical issue. At this tournament, Lincoln-Douglas debate argued whether colleges ought to restrict constitutionally protected speech on campus.

Bangor’s speech and debate teams are co-coached by Mr. Joe Pelletier and Ms. Amy Trask. Coach Pelletier also reports that the Bangor Debate Team and the Congressional Debate team won the 2017 Sportsmanship Awards after a vote taken by coaches present at the tournament.

The Bangor High School Congressional Debate team also competed at this tournament, led by overall Debate Team Captain Sydney McDonald who placed second in the Senate chamber. Joining Sydney in the Senate chamber was Caroline Baldacci who placed 4th. Catherine Rudnicki and Camden Cole also competed for Bangor, and as a team helped score enough points that Bangor finished fourth in the state. Sydney McDonald was also honored during the awards ceremony as the recipient of a $250.00 scholarship in Congressional Debate, as voted on by coaches in attendance.

April 6 morning update: The latest on the coronavirus and Maine

April 5 evening update: The latest on the coronavirus and Maine

April 5 evening update: The latest on the coronavirus and Maine

In 1918, a pandemic swept through Maine — and offers lessons for containing COVID-19

April 4 evening update: The latest on the coronavirus and Maine