A few days ago, I was walking along Shannon Drive, a wide multi-purpose trail in the Rolland F. Perry City Forest (commonly known as Bangor City Forest), looking for wildlife to photograph, when I realized that I was surrounded by frogs.

They blended into the grass lining the trail so well that at first, I didn’t notice them. But it wasn’t long before I began seeing them hop away from my feet as I walked along the trail. Indeed, they were everywhere. 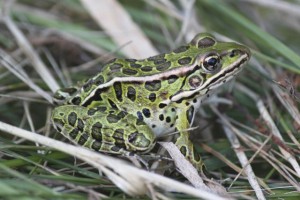 “Green frog” is the common name of Rana clamitans melanota, a frog that is quite common here in Maine. But by comparing my many photos of Bangor City Forest frogs to images on the Maine Herpetological Society website, I’ve learned that what I was really looking at were northern leopard frogs, Rana pipiens.

Both green frogs and northern leopard frogs are the color green, but their patterning is quite different.

But since I was recently bombarded by leopard frogs, lets focus on them. 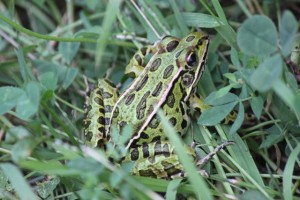 According to the National Geographic website, the northern leopard frog is “perhaps most recognizable as the formaldehyde-soaked specimen in the high school lab tray.”

OK, that was a bit gruesome.

According to the National Geographic 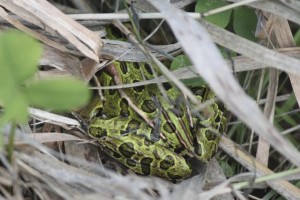 website, the northern leopard frog was once the most abundant and widespread frog species in North America, but a major decline in their population began in the early 1970s.

“Scientists have not determined the cause of the declines, but it is likely a combination of ecological factors: pollution, deforestation, and water acidity,” National Geographic states. 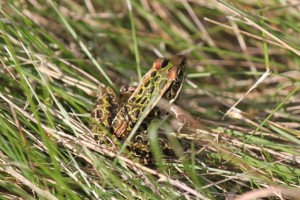 Northern leopard frogs look a little bit like leopards. They have a bunch of irregularly shaped dark spots decorating their greenish-brown bodies.  In the Bangor City Forest, I noticed that some were greener than others, and each had a unique pattern of spots.

They are considered medium-size, reaching lengths of 3 to 5 inches. If 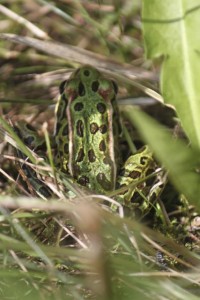 you see a really big one, it’s probably a female, which are slightly larger than males.

They usually live near ponds or marshes, but they’ll hop into grasslands. You might know them by their other common name — meadow frog.

As I walked along the multi-use trail, watching the leopard frogs launch into the air, I thought about how much fun it would be to bring my 2-year-old niece Willa to see the frogs. Seems like an enjoyable family activity to me, as well as an opportunity to teach children how to watch wildlife without touching. It would also be a great way to work on numbers. Hmmm.. looks like I need to head back to the forest before the all frogs hide away to wait out the coming winter. If you decide to go check out the frogs, trust me, you won’t be disappointed. Just be respectful of their froggy space.

These are the types of businesses reopening in Maine today

June 1 morning update: The latest on the coronavirus and Maine

24 more coronavirus cases have been detected in Maine

This tranquil paddle on Etna Pond is filled with birdsong

How to identify birds beyond your yard