LAS VEGAS — Team Iron Will, a powerlifting team from Dexter, recently traveled to the WABDL World Championships in Las Vegas. The team is comprised of four lifters that train together at Iron Will gym in Dexter. The gym is located in the old Dexter Shoe building. The group grabbed international attention with 11 first-place trophies, three best lifter awards and seven second-place medals.

The WABDL worlds are held each year with competitors from 18 different countries and all over the United States.  “Not only do you have the opportunity to compete at an international level, but you form friendships with people from all over the world.” saidDavid Palmer of Dexter. Palmer is a 16-time world champion and started the gym in Dexter.  “This was such a fun trip and everyone did amazing in the competition. Competing on the world stage is an experience you never forget.” 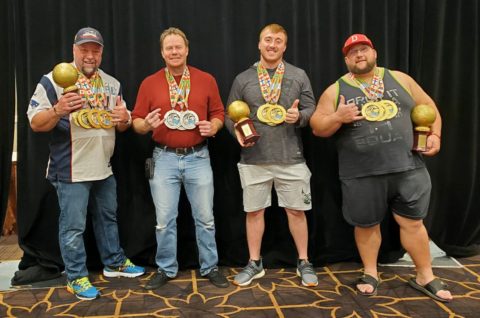 Palmer has lifted in WABDL for nine years and holds state and world records for bench and deadlift. “Power lifting is the kind of sport that men and woman of all ages can compete in, and has been amazing to be a part of,” he said.

When asked about the gym Palmer says, “This is no Planet Fitness, it is strictly a powerlifter gym where you can get bigger and stronger.  Its loud and aggressive but that is what makes it fun.”

Approximately 30 people from Dexter and surrounding areas work out at the gym.

Kyle Lockhart, also of Dexter, went head to head with the same competition that he had at last year’s WABDL worlds in Las Vegas and at the Wisconsin World Cup. Lockhart was able to take out his competition in both bench and deadlift and secure a first-place win as well as best lifter award. His final deadlift was a 655 with his bench hitting 463.

“What sets Kyle apart besides the fact he is freakishly strong is he lifts in the Raw category,” Palmer said. “That means he does not use compression gear, it is all raw strength.“

Andrew Levensalor struggled at first with his deadlift as his deadlift suit was so tight it took four men to get him into it and it almost had to be cut off him. In the end he secured multiple first-place medals in bench and deadlift and a best lifter award. His last dead lift was 600 pounds and his bench was an impressive 512 pounds.

Toby Levensalor competed for the first time at worlds in the 47-53 age group and brought home three second place medals.  Levensalor had a goal to go six for six and hit all his lifts and that is exactly what he did. His final deadlift was a 435-pound raw.

Palmer took four first-place medals and a best lifter award as well as two second-place honors. He finished the competition with a 507-pound bench and a 672-pound deadlift breaking his old record.

“Deadlift is my favorite because at 52 years old when you can out lift the young guys it’s a great feeling,” Palmer said. “However when they do catch me and outlift me in a meet it will be a very proud moment.”

A Maine woman was stalked by drone, but police said they were unable to help